Agroforesty is one of the elements in our Permaculture system. We began to implement the different stages of our agroforestry in August 2013. Using an existing apple tree and coppiced hazel, we fenced off a small area and planted the first patch up with a selection of perennials. We did this in less than a day, placing the potted plants where their final location would be.

Once the plants had gone in, we sheet mulched around them with cardboard and covered it with organic matter, such as dead rush and leaves. This helped keep the rush and grass down to give the plants a head start.

We fenced off the area to protect it from deer. We accept that our smaller friends will still be able to enjoy the fruits of our labour but at least protecting it from the deer, will give everything a chance to establish itself. 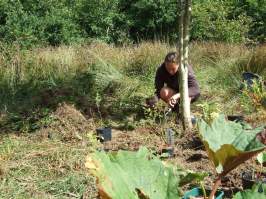 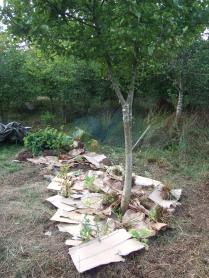 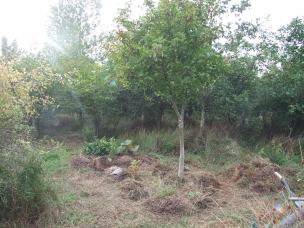 Two years on this area looks very different…..(image below) 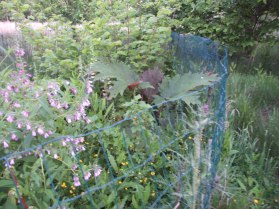 Unfortunately this picture isn’t the best to show how things are now but we’ll take more to show you. In the background you can see the coppiced hazel which was included in the first planting of this area. A Turkish Rhubard was also planted next to the hazel.

We had the first fruit from it this year (2015)….very nice and a different taste from standard rhubarb.

We have since added further perennials to this area such as hops, raspberries and chinese brambles.

This site uses Akismet to reduce spam. Learn how your comment data is processed.